The technique which has allowed an understanding of several mechanisms of the hip pathology and its treatment is called surgical hip dislocation.

Contrary to what may seem being an "open" surgery it is not too invasive, quite the contrary, allows full access to the hip joint and additionally perform other procedures, without causing any harm to muscles and hip tendons. Fully preserves the blood supply to the femoral head.

The surgery is extremely versatile and allows to treat nearly the whole pathology of the hip including femoroacetabular impingement, acetabular cavity fractures, diseases of the infant hip (with a few more complex additional procedures) (see section "Child hip").

It can also be used for placement of prostheses.

The patient lies in a lateral position throughout surgery and usually requires a team larger than in other surgeries, due to the complexity of the procedures performed. Observing mobility with the exposed hip the surgeon tests all movements and is able to diagnose situations of mechanical anomaly often not apparent in radiographs taken before surgery. This possibility makes the technique highly effective in solving problems related to anatomical bone changes, tendon, muscles, cartilage and labrum. Access to the articulation is complete, including the posterior and inferior areas not accessible by arthroscopy. It is particularly indicated in more complex forms of femoroacetabular impingement and significant deformities of the femur or acetabulum (fig. 4 e 5).

Of this technique forms part an osteotomy (bone cut) of the greater trochanter enabling access to deeper levels of the hip while fully respecting all structures (fig. 1a,b and c). Once the articulation is exposed, the femur is dislocated from the acetabulum, with possible correction of all bone changes without exception (fig. 2 and 3). At the end of surgery, all of the structures are reset and the osteotomy of the trochanter is fixed with two or three screws in its original position or lower to improve the function of the hip muscles  (see section "Proximal femur deformities").

The recovery from this surgery typically involves a hospital stay of 3 days and need to use crutches for about 4 weeks. The resumption of work varies widely, occurring on average within 6 to 8 weeks. Impact sports should only be allowed past a few months.

In the case of complex acetabulum fractures, the possibility to dislocate the hip in total safety allows treatment with full view of the articular surface (fig. 3, 4 e 5).

As the arthroscopy, this surgical technique is greatly demanding and has a long learning curve.

Ir should preferably be carried out by surgeons’ with expertise in hip preserving surgery. 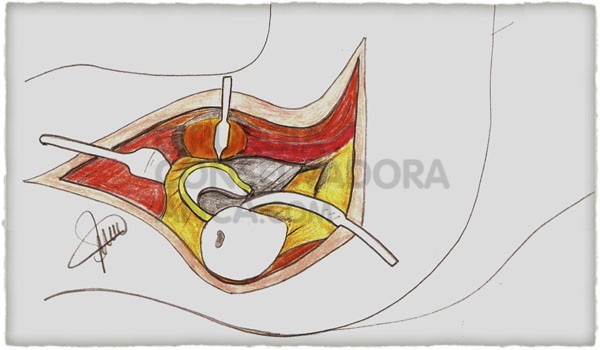