Epiphysiolysis of the upper femur

During adolescence, the growth cartilage of the femoral head is extremely active and influenced by growth hormones (increasing the proliferation of cartilage cells). In certain situations, when the mechanical "stress" on the femoral head exceeds the resilience of cartilage growth, a separation can occur between the head and the neck of the femur. The head may "slip" back and down. This situation is called epiphysiolysis of the upper femur and profoundly alters the mechanics of the hip.

It usually occurs between ages of 11 to 15, being more common in boys. It may be bilateral in 60% of cases.

It manifests itself in most cases by pain in the groin often radiating to the knee. There may be a march with the limb in external rotation and painful limitation of internal rotation.

The deformity resulting from slipping of the epiphysis (femoral head) results in angulation and posterior translation deformity that can be measured in degrees (below 30 º, 30 º to 60 º and over 60 º). Up to 30 º the region of femoral neck which protrudes can penetrate into the acetabular cavity and cause significant damage in the cartilage (type cam mechanism). T
he growth cartilage lesion may be acute and the child begins to have abruptly symptoms. Normally in these situations the lesion is unstable with total inability to walk or, can be chronic, with symptoms appearing more slowly. In some chronic cases there may be exacerbation of symptoms (acute on chronic forms).

Possible complications are the deformity and the acetabular cartilage lesion (fig. 2). There may also be changes in arterial nourishment of the head of the femur, related to the actual deformity. If left untreated the epiphysiolysis can lead to the early onset of coxarthrosis (see section "What diseases can your hip have?")

The treatment of the femur epiphysiolysis aims to prevent the worsening of deformity, closure the growth cartilage and correct as well as possible the anatomy, avoiding complications.

Fixation of the femoral head using a screw, accepting the deformation that ends up partially reshaping, is the treatment carried out in many medical centers. It may however persist a mechanism of femoroacetabular impingement that determines an adapted march in external rotation and potential progression to osteoarthritis.

In recent years, the growing knowledge on the femoral head arterial nutrition led to the development of more advanced surgical techniques. The surgery of subcapital "reorientation" of the femoral epiphysis (femoral head) is possible; provided that the small nourishment arteries are separated from the femoral neck and preserved. With this technique it is possible to restore the hip anatomy (fig. 4, 5 and 6). The development of arthroscopy has also contributed to the correction of deformities in the upper femur epiphysiolysis and prevent any cartilage lesions arising from the femoroacetabular impingement mechanism. Arthroscopy is indicated when the deformity is not very pronounced and must always be associated with femoral epiphysis simultaneous fixation with a screw (video 2; fig. 7 and 8) 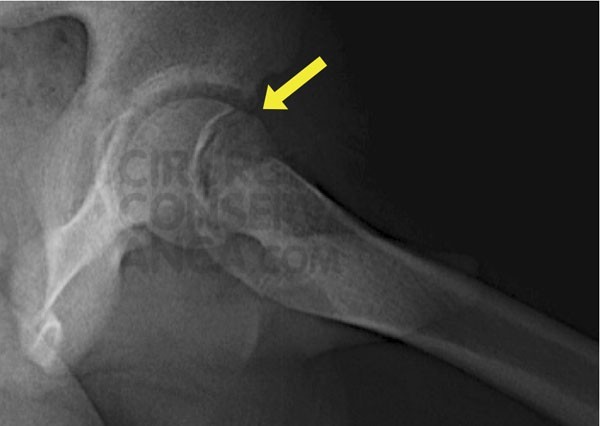 Video 1: Simulating the mobility of the hip

Simulating the normal mobility of the hip with normal morphology, with a slip of 19 ° and a 30 °. The cartilage and the labrum lesion that take place can be irreversible.

Video 2: Arthroscopy in a child with epiphysiolysis

Arthroscopy in a child with epiphysiolysis