Perthes' disease or Legg-Calve-Perthes (names of the 3 authors who reported it simultaneously) is a cause of hip pain in children. During growth there may be changes of the blood irrigation to the femoral head. Insufficient irrigation may lead to death of part of the bone tissue with deformation and loss of sphericity. It resembles the ischemic necrosis of the femoral head in adults. The main difference is the ability to remodel the head of the femur in children which is impossible in adults. It manifests itself between the ages of 4 and 10, is more frequent in males and in 10% of cases is bilateral.

The clinical manifestations are difficulty in walking and pain in mobilization due to muscle spasm, without systemic implications. Sometimes there is only a discomfort or a dull ache in the groin or knee (in about 50% of cases the pain can manifest itself from the hip radiating to the knee). On the radiograph it can be observed an increased bone density. Then the head starts to fragment and finally revascularization occurs with late remodeling. (fig.1). Often the head deformity in children leads to deformity of the acetabulum and secondary dysplasia of the hip (fig. 2). The natural progression will be for the spontaneous healing through the revascularization of the necrotic areas of the femoral head. It is a long process that takes at least 18 months. Therefore joint mobility tends to improve, or returns to normal. In more complicated cases, however, the improvement may never happen due to the already established deformity. In this situation, the risk of developing osteoarthritis is greater in adulthood  (see section "What diseases can your hip have?").

For the treatment the basic principle is to remove the pain to prevent muscle spasm and maintain joint mobility. These principles aim to maintain the congruence of the articular surfaces and the sphericity of the femoral head. In cases where the deformation is higher, the articulation may not function despite remodeling, and therefore surgical treatment may be an option.

Conventional techniques consist in extra-articular realignments with limited potential correction. Recently have been described more advanced intraarticular surgery techniques which are based on detailed knowledge of the blood irrigation for the proximal end of the femur (see section "Child hip") . Those surgeries allow a more effective correction of the deformation itself - reduction of femoral head - (fig 3 e 4a,b). The results are promising but still with little follow-up time.

Despite treatment, Perthes disease may leave some residual deformity, reason why it is always necessary to inform parents and give some advice in terms of the physical activity allowed. 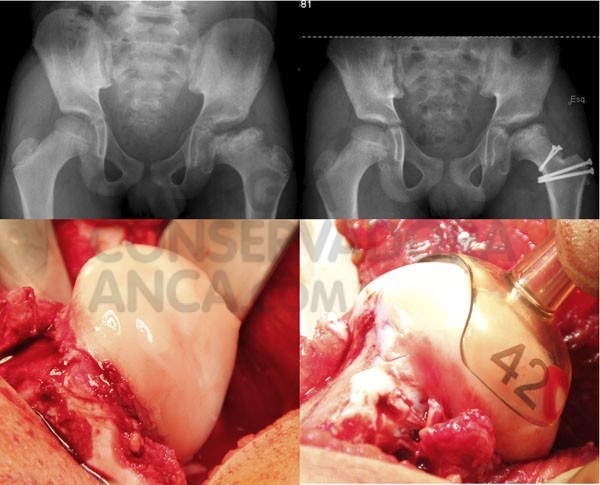