The hip joint articulates the iliac bone to the upper end of the femur. The upper portion of the femur bone (femoral head) has a spherical shape and ideally it should be perfectly curve fitting the cavity of the iliac bone (acetabular cavity) also spherical but concave (fig.1&2).

There is a coating of cartilage in both structures, which ensures a "ball and socket" movement with the lowest possible friction. The femoral head is retained within the cavity due to the existence of ligaments and a joint capsule attaching the upper femur to the iliac bone which form a kind of sleeve around the articulation (fig.3). To access the joint during preservation surgery the capsule must be open, but it is always preserved and closed in the end of surgery. Arround the cavity of the acetabulum there is a ring of fibrocartilaginous tissue - the acetabular “labrum” which works as a "sealant", closing the space around the area engaging the femoral head. We now know that exists to ensure the presence of synovial fluid (lubrication) between two layers of cartilage (video).

In a simple radiograph, cartilage, labrum, ligaments and the capsule are not visible. Only a space between the femoral head and the cavity is visible and it should be curved, concentric and measuring about 6 mm thickness in average (fig. 4 - radiograph). 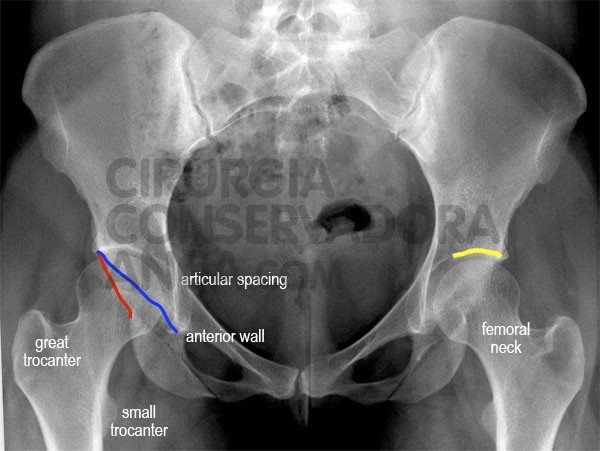 In the radiograph, in red, appears the posterior limit of the acetabulum - the posterior wall. In blue, we observe the anterior limit - anterior wall. In a normal hip and in a proper radiograph these lines should never cross. In yellow appears the loading zone or ceiling which should be centered over the head. The proximal end of the femur is connected to the rest of the bone through the femoral neck. The muscles that make the hip move are inserted into two portions of the bone near the head called lesser trochanter (internal) and  greater trochanter (external). The arteries that will irrigate the femoral head rest against the neck of the femur inside the joint capsule (fig. 5). Important details of the anatomy of these vascular structures were recently published by the author:

The acetabular labrum acts as a sealing preventing synovial fluid (red)  from going outside the articular space and promotes a smooth movement.